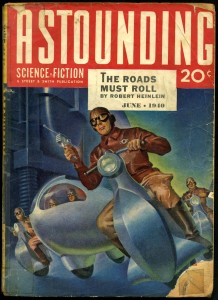 For most scholars and fans, the Golden Age of Science Fiction describes the era of science fiction writing from the end of the 1930s to around 1950. During this time, a specific form of sf came into being that challenged the prejudices of literary inferiority and juvenile escapism which had haunted 1920s and 1930s sf writing. Indisputably the most influential editor of this time is Astounding Science Fiction‘s John W. Campbell, who took over editorship in 1938 and almost single-handedly brought to fame some of the genres most influential writers like Isaac Asimov, Robert A. Heinlein, Theodore Sturgeon, Clifford D. Simak or A.E. Van Vogt. It is due to his vision that science fiction was from the 1940s on not seen as a collection of adventure stories for teenage boys but rather, as Brian Attebery notes, as fiction that could transport Campbell’s “vision of the orderly, knowable universe and the place of the scientifically minded man within it” (38). In his mind, sf stories could smoothly integrate scientific knowledge and prophecy into a sound narrative without referring back to contemporary times explicitly or the simplistic need to mimic other literary genres (i.e. adventure stories or romances). Thus, Campbell searched for authors that would, as Lester del Rey once put it, “live in their futures. And he wanted those futures to be livable. The time to visit futures that were only stage fronts was over” (cited in Westfahl 184). And even though Campbell’s own editorial skill and critical vision waned in the 1950s, his influence and the style of writing that his vision inspired has shaped the genre until today. A new style of writing and a sort of counter-movement to Campbell’ian sf would only occur in the 1960s thus effectively tying the 1950s to its forerunners of the Golden Age.

Gary Westfahl’s lecture does not provide us with just one Golden Age and a historical account of Campbell and his influence on the genre. Rather, Westfahl argues, there are “Three Golden Ages” that shaped the genre and that need to be addressed by an sf historian; Campbell’s being only one of them. Thus, the lecture provides an interesting overview of three very different strands of writing in the 1940s – all of which could be viewed as science fiction.

THE ROAD TO SCIENCE FICTION, VOL. 3: FROM Heinlein TO Here (ED. JAMES GUNN):

Part of the I, Robot-cycle of stories that deal with artificial intelligence, robotics and the challenges these pose towards humanity. The discussion of religion, emotions and reason are somewhat challenging when regarded with modern conceptions of robots.

Part of his short story cycle The Martian Chronicles, “The Million-Year Picnic” deals with a family of refugees on Mars, trying to escape war on Earth.

An unusual first contact story that deals with an expedition to the moon and the discovery of an alien artifact. The story by British author Arthur C. Clarke was the inspiration for the Kubrick film 2001: A Space Odyssey.

One of the best hard sf stories of the time, dealing with a stow-away on board a rescue ship and the cold consequences of mathematical equations determining speed and fuel supply of the ship. Thrilling and very cold indeed.

One of Heinlein’s most famous stories – a time travel paradox story in which a young man travels back in time to become his own father and much more. A real mind bender and excellently written.

for these stories, see above entry.

Part of his short story cycle The Martian Chronicles, this story employs the unusual perspective of a fully-automated house left standing long after a nuclear war has destroyed Earth.

As an example of space opera continuing in the 1940s and 1950s, you might take a look at this short story, even though the genre itself is better represented in long epic narratives of the novel form.

Science fiction? Mystery? Reality? The borders of genre are questioned in this sf story that was published in Amazing Stories but that promoted itself as being absolutely true.