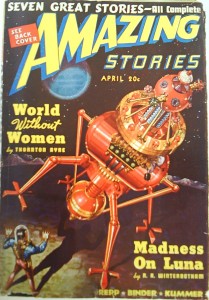 At the turn of the century, the easiest and cheapest way to publish a story was in one of the many pulp magazines (so named because the rough material they were printed on) that made up a large chunk of the publishing market at the time. Science fiction as a genre was not born yet and if it wasn’t for Luxemburg-born writer and editor Hugo Gernsback, it might never have been. Adventure stories, some even set in space or on other planets, abounded in those magazines, but it took Gernsback’s vision of “scientifiction” and his magazine Amazing Stories (first issue April 1926), devoted completely to what he himself called “the Jules Verne, H.G. Wells, and Edgar Allan Poe type of story – a charming romance intermingled with scientific fact and prophetic vision” (3), to bring about what we nowadays consider science fiction.

Gernsback’s magazine was aimed at young adults, eager to learn and be educated about science and he thus envisioned Amazing as “primarily a teaching tool, but one that did not make its teaching obvious” (Attebery 33). Combined with the popular story-telling format of adventure stories (already established in pulp magazines), Gernsback soon developed a good mixture of stories that captured his audience – even though the educational side grew less and less important, so that in the end space adventure outgrew scientific education. Nonetheless, Gernsback’s success soon led other publishers to follow his example and it can be stated that he established the genre in literary terms, or as Mike Ashley points out he started “the first of a series of SF revolutions” (64).

The introductory essay “The Three Golden Ages of Science Fiction” by Dr. Zahra Jannessari-Ladani is available for download here:

THE ROAD TO SCIENCE FICTION, VOL. 2: FROM Wells TO Heinlein (ED. JAMES GUNN):

A man drives through the desert and encounters a time traveller, who has seen the future of mankind, where the race is slowly dying. The story bears certain resemblances to H.G. Wells Time Machine and could be taught alongside this novel.

One of the few examples of early pulp fiction (originally published in Amazing Stories) that provides a certain literary appeal – written as a dystopian vision in which the rise of the automobile was commented upon.

A dark and dangerous alien stalks a group of humans – only this time we actually get the perspective of the prowling thing itself.

One of the most famous examples of pulp sf, Weinbaum was the first to describe several alien species, that did not adhere to human physiology and sociology. Tweel, a bird-like alien that is lovable, strange and utterly non-human, is discovered by a Mars mission.

for this story, see above entry – the Wesleyan is not as ideally equipped to deal with early pulp stories, there is less choice to pick stories from.

A classic mad scientist-story of a man who has determined the cause of human evolution and uses its full potential to become superhuman before eventually returning to the ooze humanity evolved from.

Another anthology to consider if you want to delve deeper into the earliest science fiction and the pulp magazines.

The novel (1917) was first published in All-Story Magazine, February 1912, in shorter form originally titled “Under the Moons of Mars” under the pseudonym of Normal Bean. It is a classic early pulp adventure story, only not set in the Wild West but rather on planet Mars.

This site uses Akismet to reduce spam. Learn how your comment data is processed.